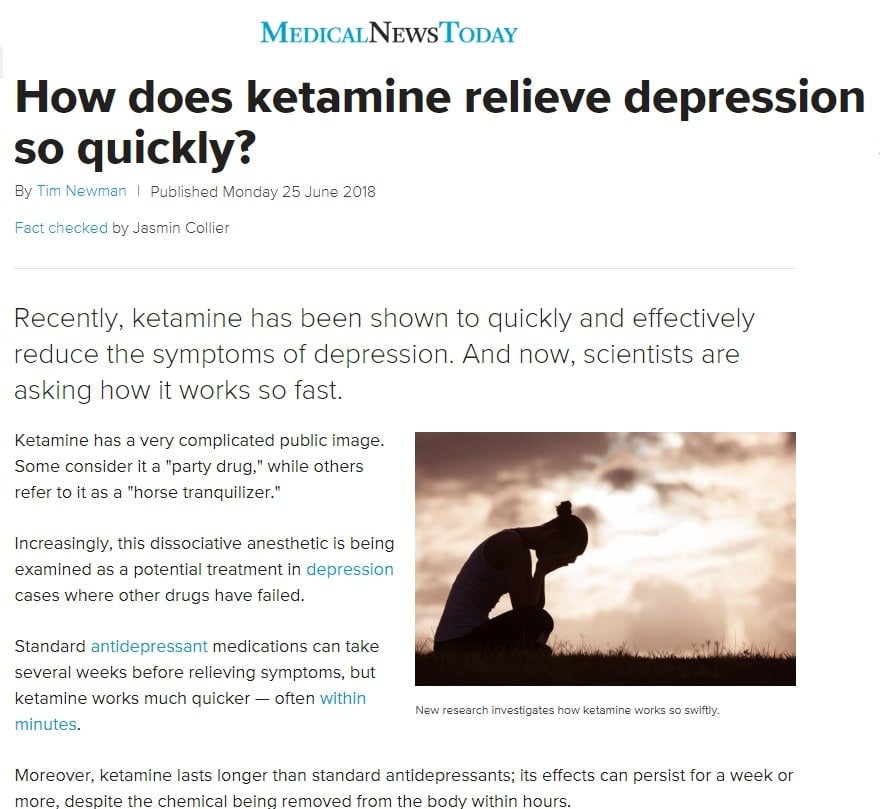 Ketamine has been used for decades as an anesthetic because of its tranquilizing effects. It has also been used as a recreational drug because of its sedating properties and now researchers are discovering other uses for ketamine, including treatment for depression. Researchers from the University of Illinois at Chicago College of Medicine have been studying the effects of ketamine on depressive symptoms and clinical test results so far have been promising.

IV Ketamine Infusion Therapy may be a viable alternative to traditional depression treatment options, such as taking anti-depressant medications that often take weeks to start working and can have unwanted and adverse side effects. Ketamine works much faster than prescription anti-depressants and also lasts longer — many people suffering from depression who undergo Ketamine Therapy find its effects can last for up to a week few months or more. Even though ketamine is removed from the body within hours, it continues to have a positive effect on receptors in the brain.

Professor Mark Rasenick published his findings from testing and research assessing why ketamine works so quickly. Professor Rasenick and his team found that G proteins, a family of proteins that act as molecular switches by passing messages from the outside of the cell to the inside, are present in higher concentrations in people with depression but are turned off. Serotonin reuptake inhibitors (SSRIs) work by forcing G proteins to become active again and this process usually takes a few days to complete.

When experimenting with ketamine, Professor Rasenick found that G proteins were forced out within just 15 minutes rather than days. This enables better communication among brain cells, which in turn, alleviates many symptoms of depression. In addition, the G proteins move back very slowly, which is why ketamine’s effects tend to last longer.

Extensive research and clinical trials on the effects of ketamine on depression are underway but ketamine is administered for off-label usage. People suffering from depression can start IV Ketamine Infusion Therapy sessions to ensure there is enough ketamine in their system. Most notice a significant difference after treatment and can continue to get infusions as recommended by the clinic.

For those who would rather not take prescription medication because of side effects or the risk of dependency, Ketamine Therapy could be a viable option for those who need fast relief from depression symptoms. Now, ketamine is readily available at clinics that offer IV Ketamine Infusion Therapy at the convenience of the patient. Treatments are easy to administer and the risk of adverse side effects is very rare.