As Seen on Psychology Today: The Case for Ketamine in Treating Suicidal Ideation 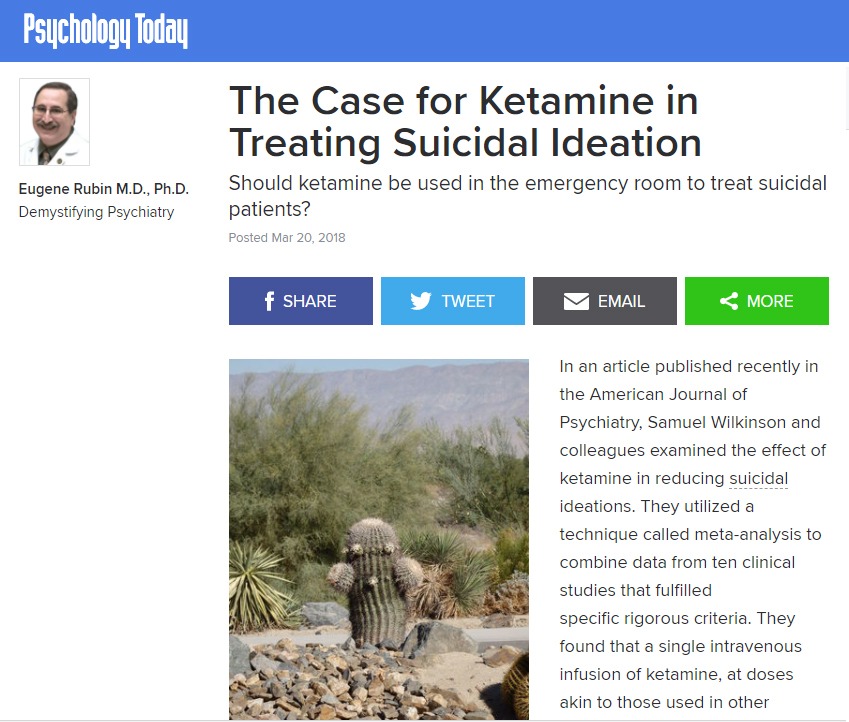 According to an article published in the American Journal of Psychiatry, Samuel Wilkinson and colleagues studied the impact of ketamine in decreasing suicidal ideation. They made use of a technique known as meta-analysis to collate data from ten clinical research studies that fulfilled specific, rigorous criteria.

The researchers found that a single intravenous ketamine infusion, at doses similar to those used in other studies to treat significant depression, caused a quick reduction in suicidal ideation.

Ketamine may also be useful for patients with various psychiatric disorders. However, further research is needed on this. Suicidal ideation  are a standard reason why some people with personality disorders (for instance, borderline personality disorder) come to the emergency room for treatment. A majority of the research on ketamine’s influence on suicidal ideations has included patients with significant depression.

There is no data on ketamine's effectiveness on patients with personality disorders with or without severe depression. It is not known how ketamine infusions would impact patients in such situations. Would it eliminate suicidal ideation? Would it allow the treatment team to be able to use a ketamine infusion in place of a conservative diagnostic interview and counseling session?

Additionally, it remains unclear what to do for individuals with recurring suicidal ideations. Should they receive repeated ketamine infusions?

Researchers are learning more about the impact of ketamine. This knowledge may make it appropriate to use ketamine for patients with suicidal ideations, who are suffering from severe depression and are admitted to an inpatient psychiatric ward. This medicine may quickly alleviate depressive symptoms such as suicidal thoughts. This will enable the inpatient treatment team to work more efficiently with these patients.

It is possible that ketamine treatment will allow for faster improvement reducing the hospitalization duration for patients. In any case, even a short hospital stay provides for a careful assessment of the patient and more time to arrive at a diagnosis and establish necessary follow-up plans.

Ketamine Clinics of Los Angeles receives patients from Los Angeles, Beverly Hills, Orange County, California, and other cities and communities in this region of the nation for ketamine infusion treatments.